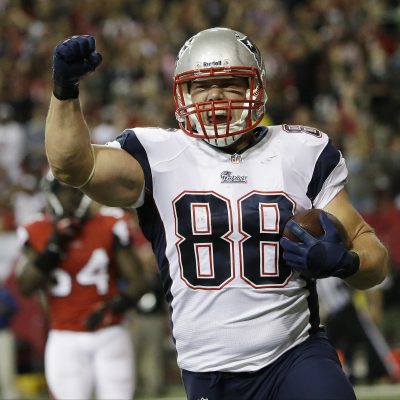 ​No Mainer who attended a Maine high school has played longer in the NFL than Matt Mulligan. That statement becomes even more impressive when one considers that Matt’s high school, Penobscot Valley, did not offer football.

​He starred in soccer and basketball and made All-Conference teams.

​His football journey began his freshman year at Husson University where he was on the basketball team.

​The Eagles were playing Mt. Ida, and the Mt. Ida football team was in the crowd. They looked at Matt’s six-four, 260-pound frame and started teasing him. Matt says it wasn’t malicious, just fun. “Buddy, you should be playing football!” shouted one of the Mustangs. Matt took the suggestion to heart.

​He connected with Husson’s football coach, Gabby Price, who put Matt at tight end where he got better every week.

​“They let me play, but they didn’t ask too much,” he told Paul Kenyon of TheProvidence Journal. “They’d say, ‘You’ll run a corner route’ or ‘You’ll run a seam route.’ Then they’d throw me the ball. They didn’t even ask me to block.”

​He would play in seven games and averaged forty yards in receptions per game catching thirteen passes for 282 yards and three touchdowns in the season.

​By this time, he loved football.

​He was so full of potential. He transferred to the University of Maine where Jack Cosgrove was happy to welcome the strongest tight end in the league. His position coach was former NFL player Phil McGeoghan, who told Matt he had a chance to play in the NFL.

​Transfer rules required Matt to sit out a year, which was a blessing. He spent the time learning the game.

​“I was so green. I had no idea of any terminology. They’d say things to me, and I’d just look at them with a blank stare. I didn’t even really know how to get in a stance.”

​He would play seventeen games for Maine over two seasons in three years in Orono. He would not be drafted, but many in the NFL were interested in his potential.

​He signed as an undrafted free agent with the Miami Dolphins, and the learning process continued. He took the field in 2009 with the New York Jets. He was a third tight end and one of the best blockers in the league.

​“Over the near decade Matt played in the NFL, he was by far the best blocking tight end,” says his good friend Mike DeVito. The two were teammates with the Jets for three seasons. “Defensive ends and linebackers would purposely line up on the opposite side of the field to avoid Matt. He was one of the strongest, toughest, most vicious tight ends the NFL has ever seen.”

​He played in eighty-nine games for ten teams, including thirty-one starts. He played in ten playoff games and his teams made it to the AFC Championship Game three times.

​Along with being a fierce blocker, he caught eighteen passes for 170 yards and two touchdowns. In 2013, Patriots fans were thrilled when he squeezed a TD pass from Tom Brady, his reaction shown in the picture above.

​Now that his playing days have ended, he has most recently taken the position of Strength and Conditioning Coach at UMaine. He also does private consulting on strength, physical conditioning, and wellness through his company, Northern Maine Strength. His clients include individuals, businesses, public agencies such as police and fire departments, and gyms. Matt is an assistant pastor and resides in Northern Maine with his wife, Stephanie, and their three children.